We would like to address you in this way, offer you something extraordinary and wish you good health. Health, that is the topic, which will be dealt with in relation to our unique offer. Allow us to introduce ourselves. We are three associates – owners of a fantastic facility, where Mother Nature is represented as much as possible through her gifts of earth and sea for the benefit of us all. Mother Nature has always been and will continue being helpful to our health and through this our creation offers her incomparable help for the protection of all of you. 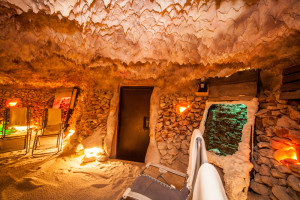 A masterpiece is preceded by an idea and the first one to get that idea of the three of us was a young mother of three children. She raised her three children using the principle that “it is wiser to prevent a disease than to heal it”. So one day, at the beginning of 2005 to be more exact, she came to me, her mother, with great enthusiasm and with the idea “LET US BUILD A SALT CAVE”. I not only approved of this suggestion but also became a shareholder in the nascent company by providing my savings.

My decision to start an entrepreneurship as a pensioner together with my daughter, a mother of three children supposedly “resting during her maternity leave”, was not easy. At the age of around 60 and quite similar to many others, health has become the most important thing for me. That was “the” deciding point – to do something for my health – and, moreover, fulfilling my long-time dream of helping others and myself at the same time.
Another “yes” for the salt cave idea was my personal presence during regular medical check ups for serious cardio-vascular diseases, oncological diseases and several serious operations of my, by now late, husband. Along with long hours spent by his hospital bed and afterwards with him in domestic care after the amputation of his limb, since he was confined to wheelchair, and finally a farewell to him after heart failure.
I would like to add to the big suffering, which I saw during the several-year-long departure of the father of my two daughters from this world and many seriously ill suffering in hospital rooms, only the following: “Man, you are the best doctor for yourself and each day you have the ability to get rid of your small health problems or alleviate the pain and suffering. You have the wisdom of centuries at your hand to do that, which you can make use of in modern times as well.”

A third associate – another woman, which meant “three women – three different worlds”, and our entrepreneurship didn’t become an entrepreneurship…
A godsend came at the right time, that is in the last moment, a “man” with healthy common sense and an open heart, lent a helping hand to the two “entrepreneurs” and became our “rose among thorns.”

Our common creation, into which we put aside savings, ours and borrowed, also triple love, faith and hope, our “Genuine Salt Cave” came into being in June 2005.

It is full of salt and love and you know that it is waiting for you with open hands in every hour of your life.